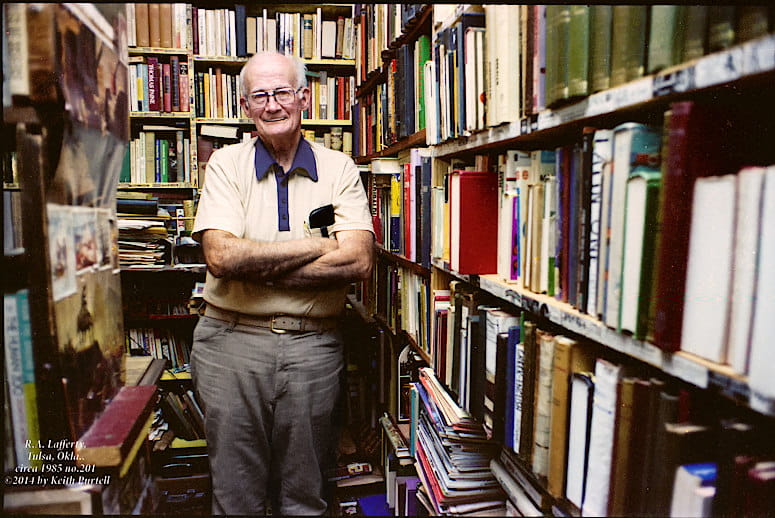 Consider yourself lucky if you have found and read this book: Only a few thousand copies were printed.

“Okla Hannali” is a boisterous, eccentric tapestry studded with the language, history and customs of the various cultures who competed for early North America.

Into this pageant steps Lafferty’s giant.

The author brings his character to life with bold declarations worthy of Paul Bunyan. Innominee is described as a farmer, fiddler, tanner, distiller, ferryman, blacksmith, boatbuilder, philosopher and frontier maverick who out-gambled Southern gamblers, who made a Kiowa horse speak and who married three women from three races in three days. He had a “big Choctaw chuckle” that always started deep in his belly. Innominee walked with one foot in the virgin forest and the other in the White Man’s city streets.

He was an ugly man, though “not as ugly as his cousin John T,” and he took 30 years to build his Big House.

Innominee is not only a remarkable fictional character, but he also serves as a representation of several real Native Americans who absorbed and transformed great chunks of European culture to become self-taught polyglots; renaissance men in buckskin. There is also much of the author in frontier eclectic Innominee, which I know from having been acquainted with Lafferty when I was younger.

“Okla Hannali” is mostly a detailed history of a crucial period in early American history, with a remarkable semi-fictional thread.

You could even argue that it is barely fiction, since the narrative is consciously assembled from a wide assortment of real people and events rather than springing primarily from the author’s subconscious. So, its persuasive capacity as a fictional tale is that it contains something of the power of our literal lives.

While Hannali Innominee’s real-life counterparts—like Chief Quanah Parker—were blasting gaping holes in white racist assumptions, the Founding Fathers were solidifying a government based in large part on the example of the Iroquois Nation. Everything is connected.

I knew Lafferty via several Tulsa writers and was one day asked to serve as photographer while my friend Sharon Scott interviewed him. The three of us had a leisurely, literary chat in Mr. Lafferty’s parlor. At the conclusion, Ray suggested we do the photography in his office. I’d never seen the rest of the house.

Ray opened a plain door, and I followed him between two long book shelves that towered above my head. They ran most the length of the room, leaving enough space for a left turn near the far wall. The shelves were packed with hundreds of books.

We turned left and I saw another narrow corridor framed by high, full book shelves on the right and several book-lined avenues radiating off to the left, each disappearing into dim recesses. We walked straight along the wall to the far corner and made another left turn, whereupon our final destination was in sight; Ray’s “office.”

He told me this was where he did his writing. He gestured to a rickety little table and a manual typewriter. A simple gooseneck lamp hovered expectantly over the typewriter.

I was dismayed. The thought of the old man working so hard in apparent discomfort. But it was his choice, and perhaps he wasn’t uncomfortable at all.

I took my pictures, but they did not convey the image that has lingered all these years in my mind: R.A. Lafferty, tucked into a tiny space amongst the thousands of books he collected, drawing together ideas and information, adding his creativity and longing for human connection, and weaving the eccentric tales for which he became famous.