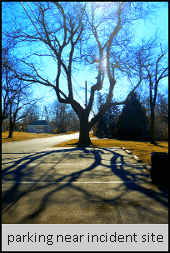 Does the spirit of Nature move through wind and leaves? Is God revealed in the natural world? I'm looking at a tree rooted in a carpet of grass. The park is warm and peaceful this morning.

A friend has loaned me a digital camera to try out. Looking through the viewfinder as I sit in my car, I'm wondering if changing a setting on the lens will make photos sharper. The first image isn't aimed—I'm just holding the camera at shoulder level pointing straight ahead—so I delete that one. Then I focus on a hackberry tree to my left. The radio is on and guests on the TED Radio Hour are talking about computers.

There's a knock at the passenger side. I look over my right shoulder to see two women about age 30. I roll down the window.

"Are you taking pictures?" one asks. I start to answer, but the other woman interrupts: "Are you from around here?"

I realize they need directions.

Most men are happy to be knowledgeable and useful. So I take another breath to ask what place they're trying to find.

That's when they attack. It's a hail of accusations alleging assault on their children. (A playground is a block away—more than 90 yards.) They also repeatedly claim "We're in law enforcement! We're in law enforcement!" Their faces twist as they build to a frenzy. "Are you a registered sex offender!?" "Do you have a D‑O‑C number!?"

Sticking their faces into my passenger window, their pony tails lashing as they cock their heads first right then left like deranged clowns, in synchronized motion, they rant: "Do you have a D‑O‑C number!?" "Are you a registered sex offender!?" Their glee is obvious.

My family has lived nearby for decades. The trees and creek are like an oasis. These natural features are meaningful to me and thousands of other people who visit the park each year.

This park has always seemed safe. The east side is more peaceful, and it attracts workers on lunch break from nearby businesses.

The attack erased that sense of peace. I kept trying to answer their questions, believing a calm answer would make everything alright. The one shouting the loudest told me I could "either leave immediately or wait for the police!"

Waiting for the law

That sounded good, because I was getting angry. I believed there would be an accounting when police found out what the attackers had done. High on the adrenaline rush of the attack—the thrill of the kill—the two strutted back to rejoin their associates.

It takes quite a lot to get a typical woman to commit an act of extreme aggression. This is one of the reasons I knew these were not typical people.

Not suspicious, but oh well

An officer arrived and asked for photo ID, and a description of what happened. I handed him the camera and showed him how to look through the images. Then I sensed movement behind me at the passenger's side window, and saw another officer peering at my vehicle contents.

Suddenly they had me out of the car and lifted my T-shirt to check for weapons. While we stood in the hot sun, shouting-woman No. 1 and shouting-woman No. 2 had returned to a group on the opposite side of the park. They had a good view of what they had started; a well-timed sucker punch. A third officer searched my car, including the trunk. (In legal circles, this is called a "suspicionless search"—the subject has not done anything suspicious but gets searched regardless. There are specific police rules defining "suspicious.") 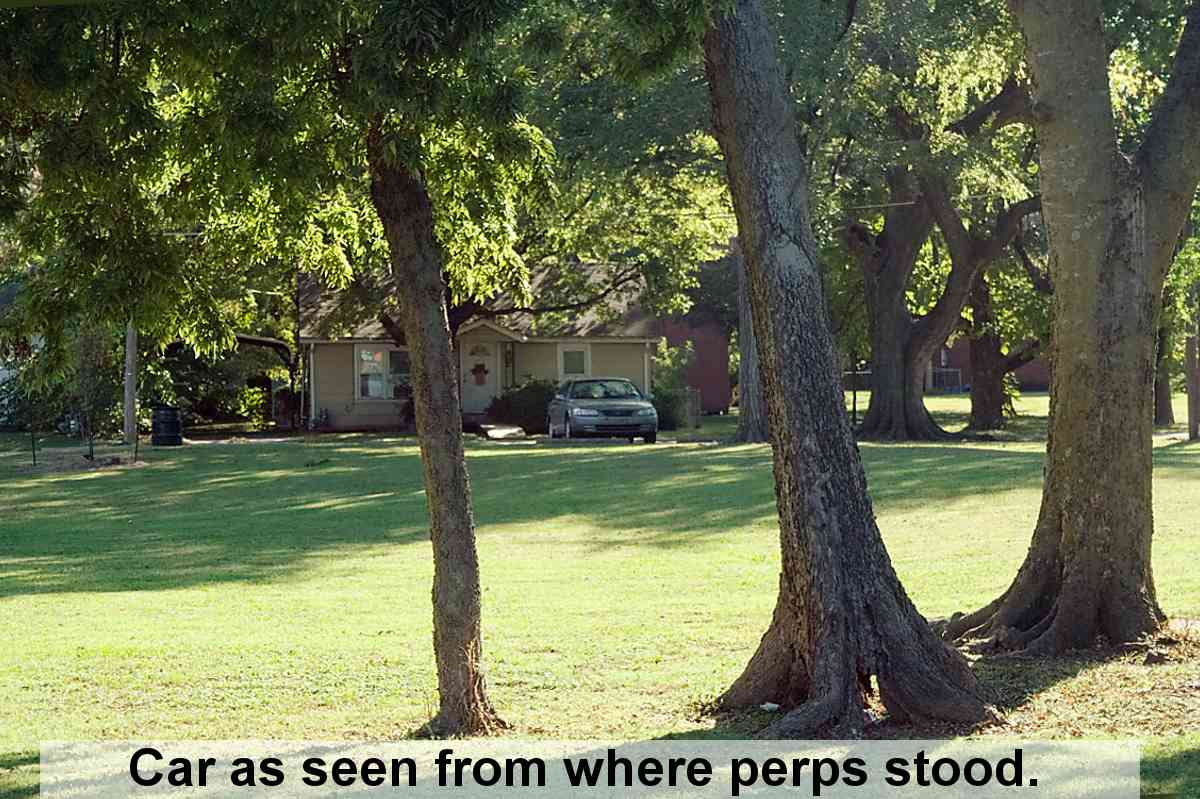 One officer walked across that distance to interview the women. His return in about 10 minutes surprised me. Two months later I would learn that the women had identified themselves as employees of the state penal system (not law enforcement), so "D‑O‑C" meant Department Of Corrections. I would also later learn that a man in the company of the women had lied to a 911 operator in order to lure police to the scene. The perps were not just jacking with me; they also jacked with law enforcement.

But on that day, I only knew that when the officer returned, he had become strangely disinterested in the attack and verbal harassment I experienced. In fact, he and a second officer shifted the tone of their remarks to focus on me.

They said I was "not a suspect," which I already knew, because the suspects were on the other side of the park. The officers added several remarks: 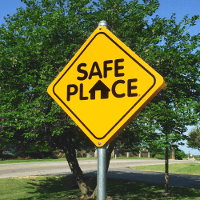 They asked if I had questions. Dazed, I answered no. As I got back into my car, one of their vehicles headed south. That left their SUV and possibly a third vehicle.

I looked in my rear-view mirror. The officers were closing up shop. No shirt lifting or vehicle searches for the people who staged the scenario. Nothing.

In fairness, the police at the park were downstream from the perps. They would not have been there if not for the prison employees.

I don't know how much unnecessary work the perps generated inside the police department. I presume this event caused a diversion of police time, skill and materials. Those resources could have gone to something important.

The perps should apologize. Not some trivial e-mail apology or even a letter. I think the two screamers and the guy who lied to 911 should go down to the police station in person, and look some officers in the eye, and apologize for all the problems they caused.

Participants in a mob get anonymity and a vacation from their conscience. If ordinary citizens had done this, they would have ended up in front of a judge. Here is another reminder of what people do when they know there will be no consequences for their behavior.

How do we forgive the sadists among us? How do we forgive those who feel gratified to aim their violent feelings at fellow human beings? At least I can be grateful that local police did not also carry out the perps' desire that police should be their instruments of physical violence.

For days I couldn't calm down. On a Friday I called the police department records division. A friendly voice said enough time had passed for an incident report to be in the system, but my name did not result in a match. Why would they not have anything in their system?

The strangest thing I remembered was the way the shouters rotated their heads while hollering in tandem; as if their faces were windshield wipers at war with each other.

On a Thursday, I took a long lunch break and drove to the police department to fill out a Citizens Crime Report. Through thick glass, the ladies at the front desk told me they no longer offered that procedure but could have an officer speak with me. Instead, a young female employee named Yasmine called my smartphone from inside their offices. I told her I worried about what might happen next time I was at the park, that I did not understand what I had done that might have led to this.

"You did not do anything wrong," she said. "If you are ever there and believe something is not right or that someone might be trying to create a problem for you, call us. Just call us and we will respond."

Wow. She was really nice. I walked out the front entrance. As I passed the few vehicles parked out front, one caught my attention. Where had I seen that compact black SUV before? With unique features on the roof and expensive metallic hubcaps? That raised a flag. At home that night, I used software to recover the image discarded as useless. I enlarged it.

There the vehicle was next to the group the attackers had been part of: Same color, same make and model, same features on the roof, and same hubcaps.

There is a long strip of asphalt named Interstate 435 that winds through the east side of the Kansas City metro. Late one afternoon in 2005, I traveled north there, returning from a job search in another state. Off to the right, I saw hillside homes and businesses lit up in the coral hues of a setting sun. I had a vivid impression of the lives of all the people there; their hopes and dreams and the stories of their local history. I was separated from them by the geographic distances of city life.

I remember that moment in my car, in relation to another moment 10 years later in the same car, in a park on a Saturday morning. As the attackers looked across some distance and beheld a person they did not know, they refused to recognize that I had a human life. They sought to impose on me the darkness in their own lives.

In June of 2020, there was a national tsunami of government violence against citizens. It followed the murder of George Floyd. The government violence targeted anyone protesting the Floyd murder and any journalists covering the protests. Watching the videos of uniformed gangs, I remembered the shrieking state employees at the park.

One connection between these two events is crime for sport. I did not know such a thing existed before the events in the park. Nor did I suspect there are people who get government jobs because they want immunity from the law; people advancing their enjoyment of adding to the world's suffering.

Nature marks the beginning and end of this narrative: From the perspective of trees, history has propelled people into conflicts. As people abandoned green places and massed by the millions in gray places, they also specialized and became strangers to each other.

Three such strangers were in a park that day, and they leveraged their relationship with local law enforcement to add guns to the mix. The trees had no influence in this assertion of power, because the power of green things is diffuse. So, the conflict escalated.

Our cultural ideas of compassion have a provenance; a history of ownership by people willing to reach across emotional barriers. We see the benefits of understanding as self evident. But what of those like the park perps who view interconnection among all humans as a type of weakness? Those whose model of right and wrong is forged in violence?

It's unclear whether we can dissuade those who choose belligerence. But we can do our best not to be diverted from the shared truths that sustain human beings in healthy communities. There are safe places, especially in our hearts.

The world is holy. We are holy. All life is holy. Daily prayers are delivered on the lips of breaking waves, the whisperings of grasses, the shimmering of leaves.
—Terry Tempest Williams

A few past and current photos

Could the prison people have been from another state?
I didn't get into that, but they were probably Oklahoma D.O.C. Here are some thoughts:

Didn't the the police department employee offer to help?
Yes, she did, but the offer was only good for the future, and phrased that way for a reason. The odds of anyone else being aggressive enough to launch an attack in the park are low, and the odds that they also would be government employees are even lower. So, the kindness I was offered in that phone call does not extend so far as to hold D.O.C. employees responsible before the same laws that you and I obey. 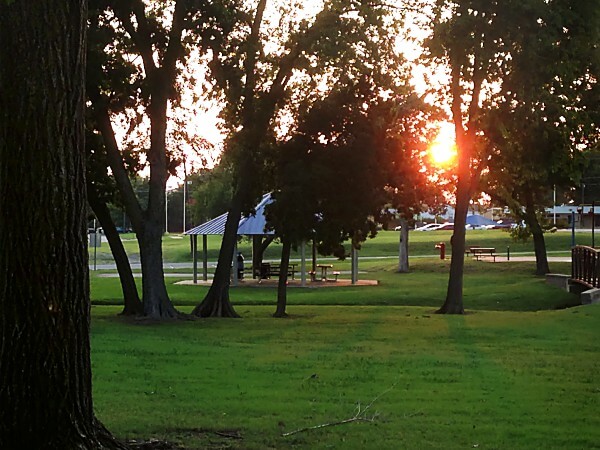 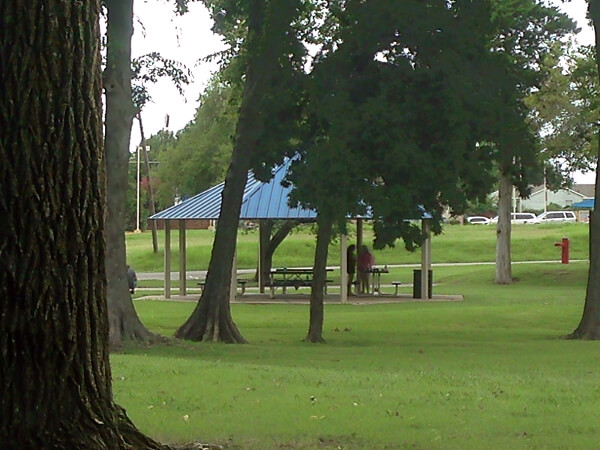