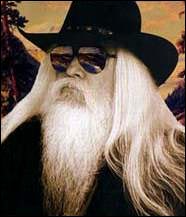 Somewhere between rock ’ roll stomp and lush lyricism, pianist Leon Russell found an unclaimed patch of musical landscape, and he made it his own. He forged a unique style which blends rock, blues, pop, gospel and country. Russell’s best ideas — “Tightrope,” “Me And Baby Jane,” “Roll Away The Stone,” “My Cricket,” “Magic Mirror” — illustrate his eclectic nature.

An Oklahoma boy who emerged on the scene in the 1960s, he demonstrated an extremely promising combination of style, technical ability and prodigious song-writing talent. His infamous 1979 on-air interview with Tulsa, Oklahoma, FM radio station KMOD revealed a relaxed good humor that has always graced his work and on-stage persona.

Not all of his musical qualities instantly endearing. God knows his voice isn’t pretty. Even that limitation has usually fallen before his determination. Until the double-CD “Gimme Shelter,” I had never heard his rendition of the country classic, “She Thinks I Still Care.” Something in the way Leon pours his heart into the chorus makes the raspy quality of his voice seem totally irrelevant. The effect of such an inspired performance is a compelling example of his oft-noted charisma. It also makes a statement about the emergence of artistic power past physical limitations.

So, why was Leon’s tenure as a top-selling artist so brief? Musicians of lesser merit have experienced wider spans of career success. Most likely it was record industry intolerance of an individualist. And, the market can be merciless to musicians who don’t stick to a predictable production and touring schedule.

I recently sat down in a record shop and listened to Paul McCartney’s solo project: “Flaming Pie.” Considering his work with the Beatles, it’s not an exaggeration to call McCartney a genius, and several cuts on the “Flaming Pie” CD were done in collaboration with accomplished songwriter and musician Steve Miller. And yet, the entire CD, even the collaborations between the two masters, seemed flat; no new ideas, no great effort to put into the arrangements and not much emotion in the performances. How is it that a few artists keep producing good ideas while many drift into obscurity? Other professions are more durable. A good carpenter may go on working for as long as he is physically able. A physician likewise seems limited by nothing more than her zeal and physical capacity for work. But artists seem destined to a short, glorious season of about 10 years. Are there rare and vital ingredients in artistic success that slip away after a short while? Or is it the loss of youthful enthusiasm? Disappointment with fame? Is it just a misperception that creative power is often compressed into a magical episode? Or am I a selfish fan, so greedy for more pleasure that I expect gifted people like Leon to spend their entire lives at top form? Whatever the answer, Russell remains an idiosyncratic and deeply sensitive artist.

Here are some samples of Leon's music: