“Down Among The Wild Men”

John Greenway’s account of 15 years among the Aborigines of Western Australia doesn’t read like a traditional anthropologist’s report. “Down Among The Wild Men” is a gritty, riveting portrait of aboriginal society and Greenway himself. He describes horrifying initiation rituals among the Pitjandjara, their intelligence and charm, their toughness in a brutal climate, and their religious wisdom. Depicted as well are triumphs and tragedies Greenway experienced with other anthropologists in the Outback.

“Down Among The Wild Men” is a non-fiction “Gulliver’s Travels;” a traveler’s tale into a very real twilight world where an ancient society operates by rules that don’t have anything to do with the white man’s preconceptions. Greenway tackles the narrative like the rough-and-tumble scholar he is.

The book doesn’t end in Australia but goes on (in the epilogue) to describe Greenway’s teaching at the University of Colorado. At one point, he carried a tire iron into a confrontation with college radicals who tried to disrupt his class. From liberal professor to reserve policeman and volunteer deputy sheriff, Greenway did it all. This remarkable tale brings to life decades of experience, filtered through a first-class mind and seasoned with an acerbic wit. 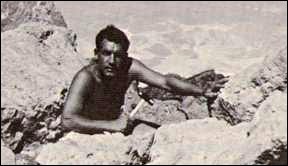 At Keibara Flint Mine, south Australia.

DATWM is a journey not just to the other side of the globe, but from one end of the psychological spectrum to the other. Greenway peered deep into folkways around the globe and decided much of 20th-century Western society was irrelevant, self-indulgent malarkey. Although Greenway has been known to (somewhat tongue-in-cheek) refer to himself as an neofascist, he is really more of a no-nonsense moderate with a devotion to the importance of rational civil structure. This book leaves the reader deeply respectful for the tough, pragmatic Australian Aborigines. And, at the conclusion, Greenway emerges as a blazing intellect with big, dirty knuckles.

Greenway’s scathing review of critics who wrote about the Australian film “Walkabout.”

Manfred Helfert makes a convincing argument that a folk music recording by Dr. Greenway was the inspiration for a Bob Dylan song.