The Dreamer As Sorcerer

Astonishment and excitement; my first exposure in 1973 to Jack Vance’s literary style was a dazzling experience for a teenager. Upon entry into the vault of his imagination, I found a whole series of other-worldly societies, all populated with iridescent and peculiar beings.

Jack Vance is one of those rare writers whose prose is absolutely recognizable within the first few paragraphs; an American original with an unmistakable literary voice.

I was drawn into the undertow created by his prose, into a verisimilitude that provided sensual relief from an often boring everyday life in suburban Oklahoma. Lumped into the science fiction category by book stores and libraries, Vance’s stories bear little resemblance to the technology-obsessed and sloppily-written material produced by writers found on the same shelf.

Vance has obviously worked hard to assemble his ornamented structures, but there is a sense of delight; a sophisticated mischief in the characters and dialogue. Sometimes there was violence that loomed behind a pretense of politeness, as if civilization was a finely articulated veil across a brutish face.

His illusions of alien cultures rely on a use of language patterns derived from baroque idioms. Vance also possesses a talent for inventing convincing-sounding character- and place-names and a finely-honed ironic wit.

Despite Vance’s imaginative wandering, there is continuity in many of his themes. One example: His recurring social climbers, religious nuts and narcissists constitute some of the longest-running and most withering satire of human pompousness in contemporary fiction.

Vance has actually enjoyed three careers as a writer, since he has also written successful fantasy (Lyonesse) under the same name and has earned critical acclaim for mysteries (The Fox Valley Murders) penned under the name John Holbrook.

Vance’s contemporaries — like Philip K. Dick, Ursula K. LeGuin and Gene Wolfe — often garner more praise from critics. The reasons for this have a lot to do with personality types. Vance has a craftsman personality. That puts him a bit at variance with authors whose success in mainstream fiction is mostly due to their ambition to be artists, and definitely at odds with most critics, who are intellectuals.

The story of Jack Vance is the story of the author as individualist. Vance’s willful divergence from accepted tenets also constitutes a refusal to cooperate with the standardization of American “science fiction;” a sameness that remains apparent. That sameness is the main reason I took a 20-year hiatus from reading this genre in which Vance’s writing is often placed.

Is it escapism? On a certain level, yes. The typical Vance hero suffers but always triumphs over hardship, is gifted with confidence, intelligence, useful skills and luck. In real life, many people pour out their energy, only to receive disappointment. Vance’s writing is therefore escapism on the level that such satisfying adventures are often wish fulfillment.

Having said that, if art educates and uplifts, and entertainment distracts and amuses, Vance has navigated a tightrope between the two with supreme grace.

Suggested reading: “The Dying Earth,” “The Eyes of the Overworld,” “The Dragon Masters,” “The Last Castle,” the four Tschai books (“Planet of Adventure: City of the Chasch, Servants of the Wankh, The Dirdir, The Pnume”), the five Demon Princes books (“Star King,” “The Killing Machine,” “The Palace of Love,” “The Face,” “The Book of Dreams),” “Emphyrio,” and “The Moon Moth” (short story). 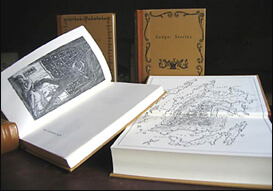 No description of Vance’s literary status and the allegiance it has inspired in readers would be complete without recognizing the Vance Integral Edition. In 1999, more than 300 volunteers from across the globe began work on the VIE. For six years, they cooperated via the Internet to create a definitive and complete edition of Vance’s work in 44 volumes.

The books were published in a “Readers” style with leather spine, and full-leather “Deluxe” version. The price for a Readers subscription started at $1,250, then rose to $1,500. Deluxe subscription was $3,000. Several dozen sets were donated to libraries. It was an amazing accomplishment with one flaw: Most Vance aficionados simply couldn’t afford the cost, and the press run was sadly inadequate at approximately 600 sets.