Foucart’s City Hall was victim
of progress in 1955

When the bulldozer yanked on a steel cable tied to the old Guthrie City Hall tower, the historic structure didn’t budge.

It was supposed to disintegrate. 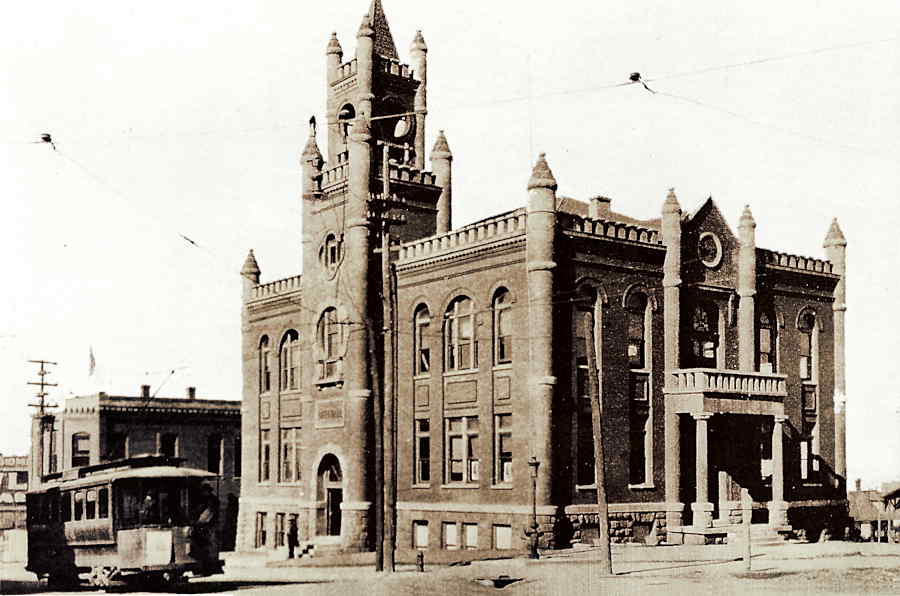 An Oklahoma City engineer had reported it was in danger of total collapse at any time. A large crowd of sightseers stood in the warm morning weather of July 13, 1955, to witness the death of architect Joseph Foucart’s 1902 masterpiece. Most of it had been dismantled or demolished by the C. H. Cowen Construction Company over the previous six weeks. Gone were the high arched windows, the parapets and the balcony over the east entrance. Gone were the turrets and towers with their specially-molded curved bricks. They had all succumbed to the wrecking ball.

The 53-year-old building’s interior wooden parts had been described as a fire hazard, and Daily Leader publisher Norman H. Smith had written a front-page editorial warning Guthrians that if anyone was hurt inside the old building, taxpayers would end up paying for a lawsuit.

The cable snapped twice, but there was no surrender. The tower’s unique round windows, the largest shaped like a white stone keyhole, the middle one a flower-petal pattern of brick and wood, looked down on the offending mortals. City officials were embarrassed. The sight of a bunch of machines bashing and tugging on a graceful and dramatic old landmark looked a bit like bullies assaulting an elderly gentleman.

Guthrians, who had been assured a modern new structure would be for the best, looked on with mixed emotions. They weren’t even entirely sure this was what they wanted. The 1,190 voters in the December 1954 bond election had approved rebuilding City Hall by a margin of only 110 votes.

The wrecking crew was frustrated. The city’s most prominent reminder of its glory days as a territorial Mecca and state capital, the site of the 1906 Oklahoma state constitutional convention, just would not die.

The distinctive red-brick turreted building was a dramatic reminder not only of the constitutional convention, but also Gov. Charles Haskell’s inaugural ball and many other dramas of Guthrie’s four brief years as a state capital.

It was also a reminder of Guthrie’s greatest disappointment. In 1910, Gov. Haskell removed the state seal to Oklahoma City, leaving behind a shocked and dismayed Guthrie. The resultant local outrage had been fierce but ineffective.

Two hours later, at 11:45 a.m., after much more tugging and cursing, the 80-foot-tall landmark finally fell, sending bulldozer operator Charles Douglas running for cover. About 100 tons of history crashed in a cloud of dust and rubble. In its place officials built a pale, plain building, designed by the Nolen-Moore architect firm of Oklahoma City.

The new City Hall was a typical 1950s brick-and-concrete cube inspired by German designer Walter Gropius, whose glass box structures had come to dominate the nation’s post-World War II urban skylines. The only recognition given the previous City Hall’s historic importance was to preserve the old tower bell out in front of the new building as a sad reminder of faded glory, lost to modernization.

Guthrians in July 1955 weren’t cold-blooded or totally indifferent to history, but they were caught up in the spirit of progress the United States felt at that time, and no one foresaw historic architecture in this area could someday attract tourists.

They also had very limited finances. The cost of an alternate site for the new City Hall had been estimated at $50,000. Estimates of repairing the old structure ranged from $50,000 to $75,000, and the cost of turning it into a museum was estimated at between $250,000 and $500,000. Whereas, Cowen Construction Company owner Link Cowen had submitted a low bid of only $139,623 for an entirely new building.

Mrs. Hugh (Betty G.) Adams and Mrs. Elton (Beth) Lehew struggled to rally opposition against the imminent destruction, and Cora Belle Nelson was mentioned in a Leader article as trying to raise money to save City Hall, but all in vain. People had other things on their minds. Other than creating a museum, that is.

New, new, new. Almost everyone was caught up in it, and Guthrie had its own new things, including the city’s first female mayor, Ruth M. Patterson. Who wanted a creaky old building, especially one that seemed like a cruel reminder of the era of the stolen capital? Its smallest components became diffused throughout the Guthrie community, as many of the individually-numbered curved bricks from the towers were collected and sold as souvenirs by the DeMolay.

Sixteen days after City Hall was toppled, Guthrie was distracted by word of yet another new-fangled thing: a four-column Daily Leader headline read U.S. to Launch Small Earth-circling Devices. Of course, the earth-circling devices were the first satellites. The 1950s was an era obsessed with progress and speed. The two ideas were embodied in popular automobile designs; finned and streamlined to resemble jet airplanes. People wanted to get there fast and look modern.

Less than a week after the satellite announcement, on August 4, the Leader ran a full-width 8-column boldface headline proclaiming Four-Lane Strip to City Proposed. The highway system to the city was going to be modernized. A big, beautiful, shiny new thing of the 50s was about to come right up to Guthrie’s front door. Hallelujah. No one was thinking about Joseph Foucart’s architecture anymore. The future had arrived and Guthrie didn’t intend to be left behind again.

The lost building was mostly forgotten, and in subsequent years other important structures met a similar fate: the Royal Hotel, the Municipal Bathhouse, Brooks Opera House and the Ione Hotel. All were shoved aside for parking lots. Their former locations became the domain of the automobile.

Yet, the city that sought growth and industry remained fairly constant in population. Then, in 1970s, in the midst of the preparations for the 1976 national bicentennial celebration, Americans developed an interest in where they had come from and their links with the past. In 1974 the Logan County Historical Society, working with private sources and the federal government, began to aggressively pursue funds for historical preservation in Guthrie. They were operating in a climate where civic pride was on the upswing, local history was seen as a good investment, and government assistance was available.

Private sources raised $5,081,682 in general equity, Industrial Revenue Bonds brought in $7,180,000, various limited partnerships yielded $2,650,524, and federal monies from the Department of Housing and Urban Development totaled $1,997,715. Over a period of about 15 years, the historical society helped bring in $16,909,921 to restore or preserve 52 of the 97 buildings in downtown Guthrie designated as historically important. No municipal funds were ever used.

The city finally awoke to how unique it was, and what a resource those fabulous old buildings and their inherent historical dramas were. The amount of money spent on restoration spoke of the investors’ motivation: it demonstrated that they weren’t just fixing up old buildings, they were saying they had faith in the dignity of their past, and that remembrances could be shaped to include the honorable facets of Guthrie history, as well as the mistakes.

Guthrie now takes great pride in its heritage. Tourism, rapidly becoming a major Oklahoma industry, is seen as an important potential local source of revenue and employment, and a bulwark against the creeping death of small towns in Oklahoma. And for the unbelievers, the naysayers and pooh-poohers of history’s value, the image of the original City Hall stares out at citizens from the city’s logo, a reminder of what Guthrie had, what it lost in a reckless and distracted moment and, perhaps, something of what its future may be.