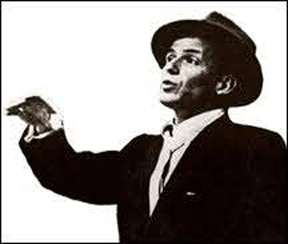 Singer Frank Sinatra’s contributions to American music are immense, and they exist on two different levels. He is successful not only as an innovator, but also in the sense that he delivered a liberating message for men trapped in the myth of machismo. My focus is on the latter.

In a culture where men are discouraged from expressing their innermost feelings, discouraged from showing tenderness, and told that romantic longing is not masculine, Sinatra recorded music that demonstrated the integral link between romance and masculinity.

In the “New Rolling Stone Record Guide,” writer Stephen Holden said of Sinatra: “No male pop singer before or since has offered eroticism so tenderly ...” I interpret Holden’s use of the word “eroticism” to mean both romantic and physical longing for women, and, arguably, the male longing for life. Yet, there is nothing wimpy in Sinatra’s music. He remains unapologetically male in both a traditional and expanded sense.

When people refer to him as “The Voice,” the aren’t just talking about his smooth delivery. The term also refers to content. The skinny Italian kid from New York epitomized the American male experience, and our struggle to understand and deal effectively with the passages of life. As much as I enjoy rock ’n’ roll, it seems an inadequate medium to express sexual intimacy as well as Sinatra did with his big band sound. Furthermore, the prevailing etiquette of rock ’n’ roll declares taboo any unabashed expression of romance that is not also maudlin.

It is especially ironic that rock ’n’ roll — music of independence and liberation co-invented by hippies — has devolved into something that usually affirms a machismo viewpoint, and that a spokesman from a previous, more conformist generation ends up sounding like the rebel.

Suggested listening: “The Frank Sinatra Story in Music,” “Songs For Young Lovers,” “In The Wee Small Hours,” “Songs For Swingin’ Lovers,” “A Swingin’ Affair,” “Where Are You,” “Come Fly With Me,” “Only The Lonely,” “September of My Years.” A variety of boxed-CD sets are also available.