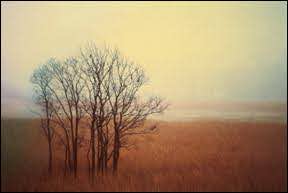 His awareness of the feeling was re-awakened during adolescence. Since that time he has tried to understand this quality of childhood consciousness that faded and was then re-introduced into his adult life. He wants to understand what it is, and he wants to know if he is the only one who feels the feeling.

The feeling is good. It does not possess the chemical potency of ordinary emotions, and it does not flood his body like anger, laughter, fear or desire. The feeling does not dull him like a drug, and, although his attention can easily be diverted from it, the feeling seems to carry the connotation of being part or even a manifestation of something very powerful. It has an aura of association with grace.

What is the feeling of? What does it subscribe to? It is a feeling of being submerged in a place, of being connected with nature, of expanded reality. It is also a feeling of strange beauty.

It is significantly linked to weather and seasons. The feeling is most prevalent in fall, very strong in spring, then summer and finally winter. It has a spatial or psycho-visual quality; an internal sense of majesty, as if he has walked into an emotional cathedral belonging to a place or situation. It is always something he goes into and never something that emanates from an object. However, some objects have an important role.

The moon is an especially powerful component of the feeling. Its presence and its light evoke other-worldly beauty from trees, nightclouds, water, the wind itself. Ordinary natural objects are a potent presence in the feeling. Trees are towering sentinels; imbued with a resonant significance.

Sometimes his religious upbringing came to the forefront, and he pondered the non-personal presence, the spirituality and the magicality. Was he basking in the glory of God? If so, it was a god who did not speak directly to him or in a familiar language. He was not disappointed. It was a privilege to be here and witness such sublime visions. If he did not actually see the hand of the artist, so be it.

The feeling has nothing to do with the points of the compass and, in fact, is inhibited by thoughts of geographic direction. There is also no conventional sense of time. However, specific locations, especially outdoor places where nature thrives, seem to harbor the feeling in abundance. So he thinks of the feeling as a kind of place magic, or some essential part of nature.

He has tried — without much success — to analyze the feeling as a kind of brain activity. He wondered if it was a low-level activation of the imagination that did not involve daydreaming or fantasizing. That description had the believability of a good model, but it did not really have the ring of truth. The journalist in him weakly described the feeling as a particular kind of reverie linked to direct observation. He also considered the relative relationship between this feeling and other, conventional feelings. Anger is very far from the feeling. Fear, farther yet. Sadness is relatively close to the feeling. Joy is closer.

Despite the failure of a scientific approach, he has identified associated factors. Sound is part of the feeling, especially ambient animal sounds created by birds, insects and the wind. The cascading drone of cicadas and the songs of birds are both sources of the feeling. He immerses himself in their musings, their business of being godlike in tiny increments. Such meditation has not yielded an answer to the question: Do such sounds cause the feeling or are they only components? There are other such questions about flickering lightening bugs and scented summer evenings.

After returning from long passages of time without the feeling, he experiences the shock of recognition. Memories of childhood are usually either one and the same with the feeling, or largely a part of it. Thus the feeling holds a mythic or archetypal quality in childhood remembrance. The feeling there is pure, powerful and beautiful, undiminished except by the distance between events.

The feeling also holds an unusual power or quality in terms of its effect on memory. Often, when in the feeling, he perceives a fundamental connection between what he is looking at and something he has looked at long ago. Different places, different times, and yet the sensation of kinship is unmistakable. That in itself raises another question: Is the feeling forging relationships between experiences or revealing them? Whichever, the resonance across time introduces a sense of completion; a resolution of the unnatural distance between life events which have been pushed apart by the minor madness of everyday life as a human being.

Is the feeling transmitted by beauty? Or is it the response to beauty? Even more than an understanding of the feeling, he longs for a way to share it with others. Lacking appropriate words, he decides, for now, to settle for the kindness of a temperate fall wind and an open country road.

A misty rain fell on the city, bringing with it a cool breeze and reflecting back a mysterious glow that was once street lights. He walked through the fog and looked into the sky. What did the feeling bestow upon him? A sense of glory that beaconed; that invited him in. A sense that he was surrounded by a beautiful power. As he walked down streets, past quiet houses, he realized yet again what he had known as a boy, and somehow forgotten, that the night itself is a spirit.