Around the turn of the century, a nondescript old man was often seen in the early-morning streets of Paris, France, carrying a heavy wooden camera. Eugène Atget was a former actor and occasional painter who became passionate about photography. During a 35-year career, he produced some 8,500 images of Paris and its outskirts.

The images don’t so much show people themselves as they do evidence of humanity. Each found artifice is an expression of human aspiration, whether it is the flying buttress of a gothic cathedral or a parked car. What binds all his images is the ubiquitous, revealing power of light; usually soft morning light made even more inviting by Atget’s gold-toned albumen prints. Captured in his lens, even empty places whisper gently about the texture of human habitation. The dawning glow in his photographs is an example of a kind of light photographers refer to as “pearlescent.”

Much about Atget’s motives is not clearly understood. He promoted his enterprise as photography for artists, who evidently drew or painted from the pictures. Atget’s labor was also part of his attempt to create a permanent record of a vanishing city. Atget had become keenly aware that a unique era was passing. Within the scope of his powers, Atget sought to save something of Paris that he believed was immensely valuable. Whether it was also his ambition to provoke questions about reality and beauty may never be known. 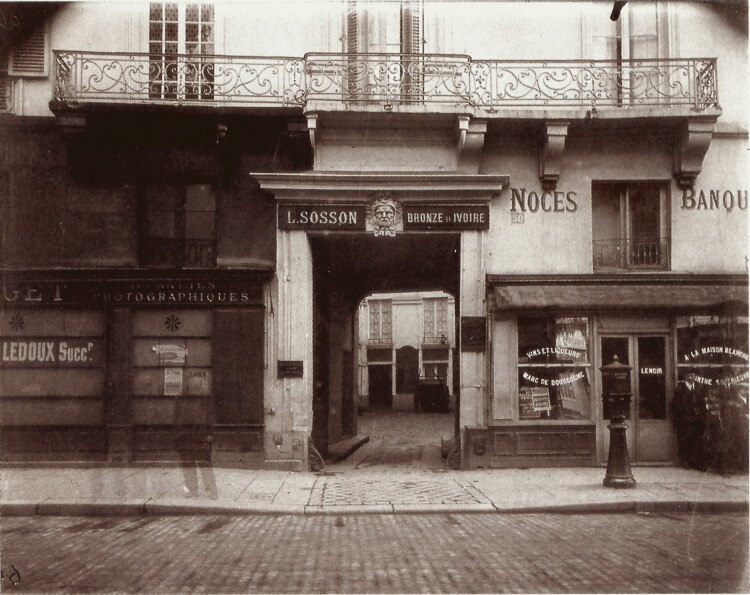 Two images from Pantheon Books’ “Eugène Atget” come to mind. In “House, 50 rue Turenne, Paris 3, about 1913,” the few people in the picture are either on the periphery, or appear as faint ghosts left behind by their brief stay during the lengthy exposure. Their abode, however, is solid and heavy. In “Corner, rue de la Montagne-Sainte-Geneviève, Paris 5, 1924,” the situation is reversed. This time it is a beautiful old building rendered ghostly by its distance in the morning mist and by Atget’s orthochromatic* film. The viewer cannot help but wonder if these things, too, these artifacts of human creativity, are not as fleeting as their two-legged builders. Even the Parthenon will someday crumble into the same earth as its Greek architects and stone masons.

Atget was not just some old camera buff wandering the streets. He was a steward of history who encapsulated beauty before it was lost in the progression of time. He was gifted with a unique sensitivity to the power and meaning of light. Although the relative lack of people in his images prompted Walter Benjamin’s criticism that the photographs were “empty ... empty ... empty,” that rather misses the point.

Through Atget’s eyes we see a world bathed in gentle, diffuse sun. Sometimes the image is only a home, a street or building, and sometimes it is a wooded area, a stream, or a cluster of trees. Some of these objects have emerged from the hand of man, and others are the product of another maker. What the photographs do then contain is, in the very least, a record of the coexistence of people and God.

*Film in that era was only sensitive to light in the blue end of the spectrum.